In Sickness and in Health / To Love and to Cherish 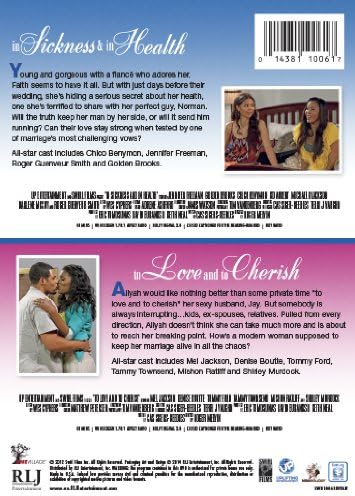 IN SICKNESS AND IN HEALTH (2012) A soon-to-be-married couple facing a potentially life-altering dilemma. With just two weeks to go before their wedding, Faith still hasn’t told her fiancé her deepest secret—that she suffers from sickle-cell anemia. The timing has just never seemed right to come clean about it. Her healthy lifestyle appears to be keeping the disease in check and she’s cherished the belief that Norman’s love would heal her. But having lost her mother to the disease at age 40, she has no illusions about its destructive potential and doesn’t want to put Norman through what her father endured. As the stress of the looming wedding brings on a few painful sickle-cell episodes, Faith reacts by pushing Norman away, which in turn triggers her sister to tell Norman about her illness. Hurt and angry, Faith calls the wedding off and, after a heart-to-heart with Faith’s father about the responsibility of marrying a partner with an illness, even Norman questions his love and commitment to Faith. Can the couple overcome their fears and embrace love, with all the sacrifice that entails, and move forward with their plans?
TO LOVE AND TO CHERISH (2012) Jay and Aliyah have been married for five years and each has a child from a previous marriage. When Aliyah’s husband shows up and demands custody of their son she tries to secretly work it out instead of talking to Jay about the situation. To make matters more complicated, Jay allows his sassy teenage daughter to move in without consulting Aliyah and the two women immediately bump heads. With constant misunderstandings and both disregarding the other’s feelings, these two are going to need to learn the laws of communication and respect if they want to make their marriage work.

There are no reviews yet.

Added to wishlistRemoved from wishlist 0
Add to compare

The Body: A Guide for Occupants – THE SUNDAY TIMES NO.1 BESTSELLER

The Body Keeps the Score: Brain, Mind, and Body in the Healing of Trauma

Added to wishlistRemoved from wishlist 0
Add to compare
$23.79

In Sickness and in Health / To Love and to Cherish