A police car sped onto the circle, coming to a screeching halt behind the five others that had gathered around the scene of the alleged crime on the circle. Tabs saw the markings on the side of the latest car to arrive. K-9 unit.

“Mrow!” he shouted at Detective Kinard. Get that car outta here! Tabs and the detective stood a few feet from each other next to the appetizer bar in the center of a paved patio in the community common area. “Meow!” No dogs allowed!

The detective nodded in acknowledgement and spoke into his radio, telling the driver of the K-9 unit to head back to the precinct immediately.

It was unlike Tabs to take such a hard stance against his canine brethren, but these were special circumstances. Tabs had decided to throw this year’s Memorial Day Neighborhood Feline Fete after reading a letter from one of his fans, an ambitious calico kitten junior model named Linus. Linus wrote the story of how he was a stray cat living off scraps on the pier in Tiburon, California behind a Mexican restaurant. He lived off leftover fajitas and the occasional mahi mahi filet, but he practiced his kitty modeling poses under the pier every night for two years until the day he got his first gig doing kitty catalog work for Petco.

Tabs was inspired by Linus’s story and gave him an internship as a junior level kitty supermodel for Tabs the Cat Industries, LLC. All of the cats at the party that night were up-and-coming kitty supermodels, and Tabs wanted to give them a taste of the good life, show them what they could achieve if they continued working their tail off to perfect their craft.

And he spared no expense. The party had a six-figure price tag. Fresh salmon flown in from the Kenai Peninsula, caviar from the Caspian, Argentinian catnip, mullet crackers from Manilla. It was turning out to be the best party of the year in the feline fashion world.

That is, until someone stole the caviar plate.

“Meow?” Tabs asked the detective as the K-9 unit pulled away. Do you have any leads?

Fifty thousand dollars worth of caviar had disappeared, and Tabs was livid about it.

Detective Kinard was a real hard ball. He was unshaved, unkempt, but sharp as a tack. Tabs knew him well, having gone on multiple ride-alongs with the detective as part of Tabs’s research for his role as Detective Taberelius in “The Departed 2.”

“I have a theory,” the detective mumbled. His voice was deep and gravely, barely more than a cough.

“The appetizer table over there. It’s, what, three feet off the ground? Got that step stool over there?”

Tabs followed the detective’s gaze, studying the former location of the appetizer plate where the now missing caviar had been.

“How much would you say that step stool weighs? Twenty pounds? Thirty?”

“Mrow?” Tabs asked. Where are you going with this, detective? Tabs was getting impatient.

The detective nodded, getting to his point. “It’s just that the security footage we obtained from the camera on top of your neighbor’s garage shows that someone moved that step stool closer to the appetizer table right before the caviar disappeared.” He let his words linger for a moment before continuing. “That’s a heavy job for a little cat.”

I’ll be damned, Tabs thought. The detective was right. None of the cats at the party tonight were strong enough to move that step stool on their own. It had to be a two-cat job, or a human.

Sensing a big reveal was coming, half a dozen police officers and more than that many feline guests of the party gathered around the detective and listened. “Now,” the detective resumed, “as you know, the Petco delivery truck pulled up in front of your neighbor’s house at exactly 9:54 p.m., blocking our view of the common area from the camera after that.”

“The thing is…” the detective continued, “Petco closes at 9 on Friday.”

Holy mother of pearl! Tabs’s eyes widened as it dawned on him.

The detective’s lips formed a thin smile. “The Petco driver was in on it.”

Rosie is ready for Memorial Day 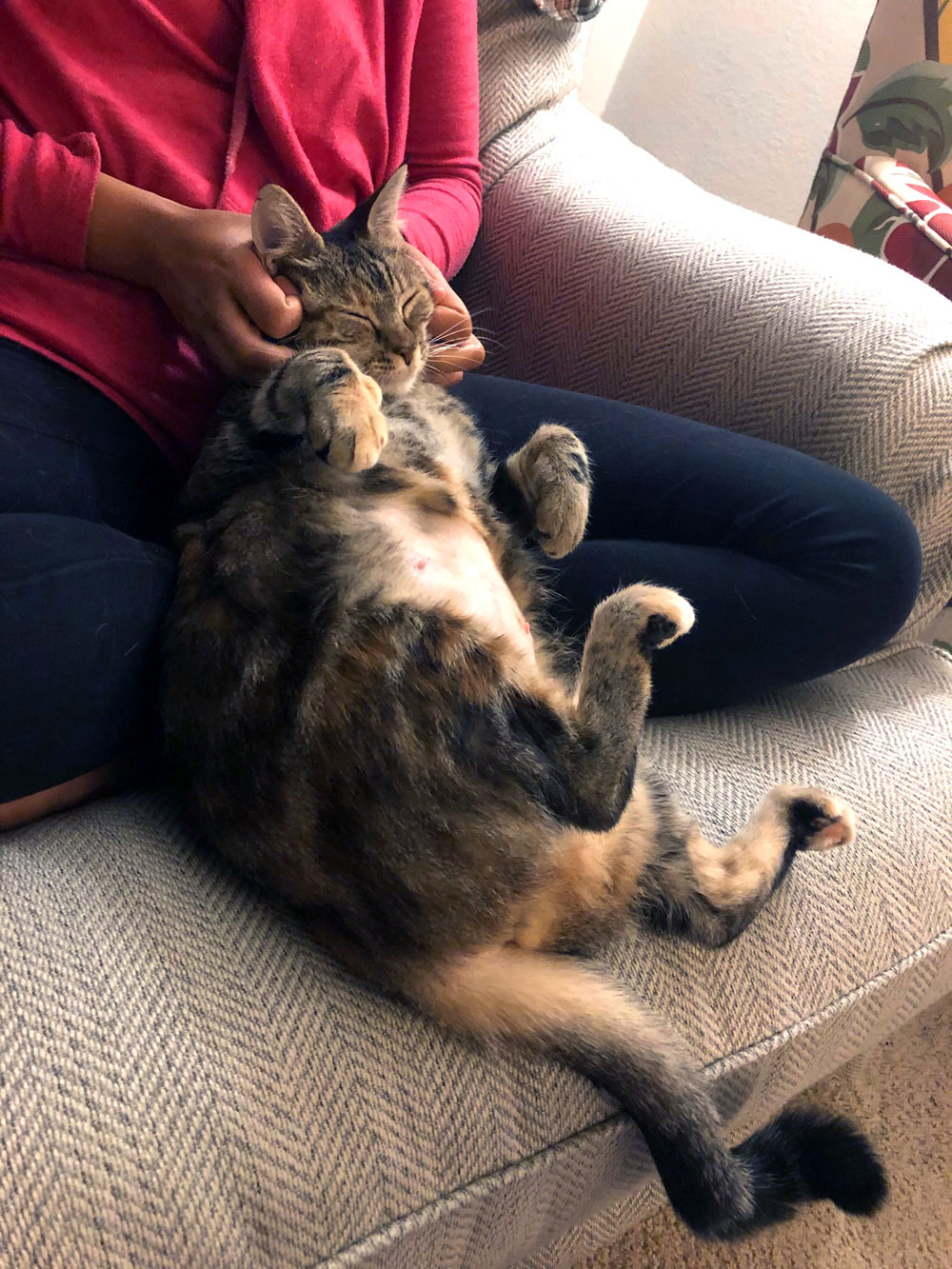 Has your relationship with makeup changed in the last year?